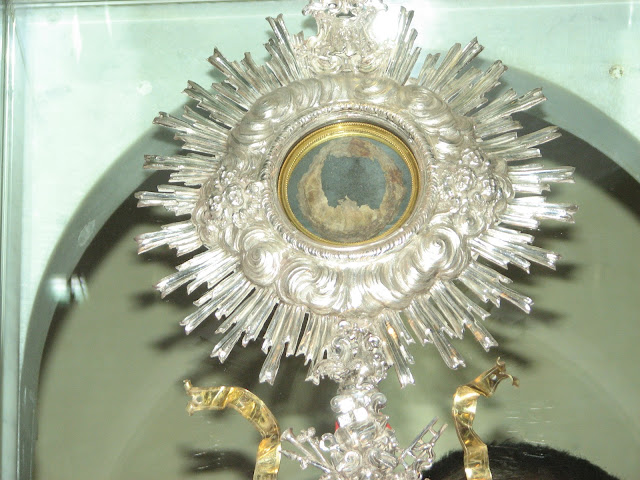 This is a photograph of the Miracle Host of the real Flesh of Jesus Christ which has been preserved in a monstrance for all to see and venerate in a church in Lanciano, Italy where the Eucharistic miracle happened in the year 700 A.D., some 1,312 years ago.

This miraculous event took place in the little Church of St. Legontian and St. Domitian, as a divine response to a Basilian monk's doubt about Jesus' Real Presence in the Eucharist. It is the first and greatest Eucharistic Miracle of the Catholic Church.

The Church of St. Legontian and St. Domitian is located in the center of Lanciano, Italy - a small, medieval town, situated halfway between San Giovanni Rotondo, and Loreto. The town was formerly known as Anxanum, the city of the Frentanese in ancient times until it was later renamed to Lanciano, meaning  "The Lance".

According to tradition, Longinus, the centurion who thrust the lance into the side of Jesus, tearing in halves the Heart from which blood and water gushed forth, was from this town. After seeing the events which followed the piercing of Jesus' Heart, the darkening of the sun, and the earthquake, he believed that Christ was the Savior. A more physical sign, however, was that Longinus had had poor eyesight, and after having touched his eyes with the water and blood from the side of Jesus, his eyesight was restored. Converted, he gave up the Army and went to Cappadocia where he was martyred for the faith. He is now known as Saint Longinus. His feast is celebrated every March 15.

A Basilian monk, wise in the ways of the world, but not in the ways of faith, was having a trying time with his belief in the real presence of Our Lord Jesus in the Eucharist. He prayed constantly for relief from his doubts, and from the fear that he was losing his vocation. He suffered through the routine of his priesthood day after day, with these doubts gnawing at him.

The situation in the world did not help strengthen his faith. There were many heresies cropping up at the time, which kept chipping away at his faith. They were not all from outside the church either. Brother priests and bishops were victims of these heresies, and they were being spread throughout the church. This priest couldn't seem to help being more and more convinced by the logic of these heresies, especially the one concerning his particular problem, the physical presence of Jesus in the Eucharist.

One morning in the church dedicated to Saints Legontian and Domitian in Lanciano, while the Basilian monk was doubting the real and substantial presence of the Flesh and Blood of Our Lord Jesus Christ in the consecrated Holy Species, he begun celebrating Mass in the Latin rite with a host of unleavened bread. During the two-fold consecration, as he held the Holy Host and Wine, his hand and body began to shake. He stood for a long time with his back to the people, and then slowly turned around to them. He said:

"O fortunate witnesses to whom the Blessed God, to confound my disbelief, has wished to reveal Himself in this Most Blessed Sacrament and to render Himself visible to our eyes. Come, brethren, and marvel at our God so close to us. Behold the Flesh and Blood of our most beloved Christ."

At these words of the monk, the Host had suddenly turned into into a living piece of Flesh, and the Wine had turned into real Blood which thereupon coagulated and split into five globules, irregular, and differing in shape and size.

The people, having witnessed the miracle for themselves, began to wail, asking for forgiveness, crying for mercy. Others began beating their breasts, confessing their sins, declaring themselves unworthy to witness such a miracle. Still others went down on their knees in respect, and thanksgiving for the gift the Lord had bestowed on them. All spread the story throughout the town and surrounding villages.

Excerpts from a document kept at Lanciano read:

"Frightened and confused by so great and so stupendous a miracle, he stood quite a while as if transported in a divine ecstasy; but finally, as fear yielded to the spiritual joy which filled his soul with a happy face, even though bathed with tears, having turned to the bystanders, he thus spoke to them: `O fortunate witnesses to whom the Blessed God, to confound my unbelief, has wished to reveal Himself in this Most Blessed Sacrament and to render Himself visible to our eyes. Come Brethren, and marvel at our God so close to us. Behold the Flesh and the Blood of our Most Beloved Christ.'

“At these words, the eager people ran with devout haste to the altar and, completely terrified, began, not without copious tears, to cry for mercy. The report of so rare and singular a miracle, having spread through the entire city, who can count the acts of compunction which the young and old, hastily assembled, sought to make openly . . . "

In 1970, 1971, and partly in 1981, Professor Odoardo Linoli, noted Professor in Anatomy and Pathological Histology and in Chemistry and Clinical Microscopy, and assisted by Professor Ruggero Bertelli of the University of Siena, conducted scientific investigation of the Holy Species and documented the analyses with a series of microscopic photographs. Here are the result of analyses as follows:

*The Flesh is real Flesh. The Blood is real Blood.

*The Flesh and the Blood belong to the human species.

*The Flesh consists of the muscular tissue of the heart.

*The Flesh is a "HEART" complete in its essential structure.

*The Flesh and the Blood have the same blood-type: AB (Blood-type identical to that which Prof. Baima Bollone uncovered in the Holy Shroud of Turin).

*In the Blood there were found proteins in the same normal proportions (percentage-wise) as are found in the sero-proteic make-up of the fresh normal blood.

*In the Blood there were also found these minerals: chlorides, phosphorus, magnesium, potassium, sodium and calcium.

*The preservation of the Flesh and of the Blood, which were left in their natural state for twelve centuries and exposed to the action of atmospheric and biological agents, remains an extraordinary phenomenon. 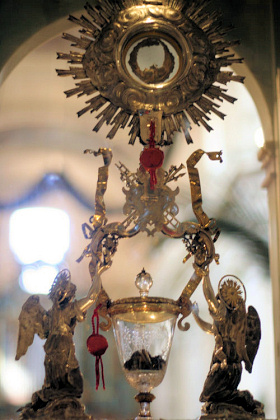 The reliquary: For over twelve centuries now, the Flesh and Blood of Christ is still miraculously preserved today in a monstrance: the Flesh is enclosed in a round gold-plated silver lunette, between two crystals, in a monstrance of finaley sculpted silver. The Blood is preserved in a chalice of crystal, and affixed to the base of the monstrance. 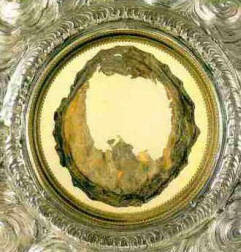 The Host-Flesh can be very distinctly observed today. It has the same dimensions as the large host used today in the Latin church; it is light brown and appears rose-colored when lighted from the back. The Blood is coagulated and has an earthy color resembling the yellow of ochre. 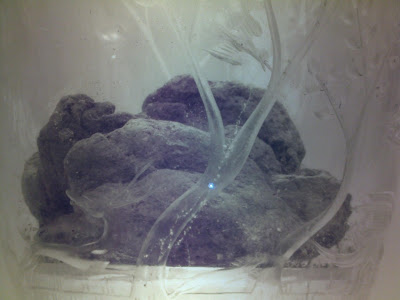 While the five pellets of coagulated Blood differ in sizes and shapes, when weighed either separately or together, any combination weighs the same at 15.85 grams. This Blood is over 1,250 years old and still contains all the properties, chemicals, and protein of freshly shed blood. And yet in the testing, it was determined that no preservatives of any kind were found in the Blood. 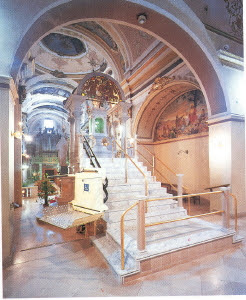 View from the Adoration Chapel inside St. Francis Church (San Francesco, 1258), built over a pre-existing 7th century church where the Eucharistic Miracle is preserved in a monstrance for all to see and venerate.

As a postscript to the Eucharistic Miracle of Lanciano, in 1978, a group of scientists from NASA performed an intensive scientific examination on the Shroud of Turin, using all the sophisticated scientific technology available at the Space Agency at that time. Among the many findings the scientists made in support of the authenticity of the Shroud, a very significant discovery was found regarding the blood type on the Shroud. It was AB positive, the same blood type as found in the Eucharistic Miracle of Lanciano.

For information, books, pamphlets, slides, postcards, and souvenirs of the Sanctuary, please apply to:

Other Lanciano Links of Interest: