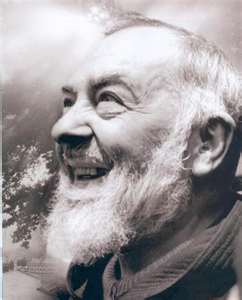 Anyone who met Padre Pio believed that he had a direct connection with the afterlife. When asked about a dead relative or friend, it was fascinating the good Padre always had an answer.

Padre Pio said of Heaven: "Heaven is total joy, continuous joy. We will be constantly thanking God. It is useless to try to figure out exactly what heaven is like, because we can’t understand it. But when the veil of this life is taken off, we will understand things in a different way."

" . . . at night when I close my eyes the veil is lifted and I see paradise open up before me: and gladdened by this vision I sleep with a smile of sweet beatitude on my lips and a perfectly tranquil countenance . . . "

"More souls of the dead from Purgatory than of the living climb this mountain to attend my Masses and seek my prayers."

"The souls in Purgatory pray for us, and their prayers are even more effective than ours, because they are accompanied by their suffering. So, let's pray for them, and let's pray them to pray for us."

"You will be surprised to find in Paradise souls you never expected to be there."

"Most of the saved pass through Purgatory before arriving at the fullness of beatitude."

Gerardo De Caro had long conversations with Padre Pio in 1943. In his written notes, he testifies: "Padre Pio had an exact knowledge of the state of a soul after death, including the duration of the pain until it reached total purification."

Pope Pius XII died in Castelgandolfo on October 9, 1958. On that day, Padre Pio told a friar: "Pius XII is in heaven. I saw him during Mass."

One night Padre Pio was sitting alone absorbed in prayer in a room at the convent when an old man entered and sat next to him: "I looked at him but never thought of how he managed to get in the friary at that hour. I asked him, 'Who are you? What do you want?' The man answered, 'Padre Pio, I am Pietro di Mauro, nicknamed Precoco. I died in this friary [in a fire] on September 18, 1908, in room number 4. I am still in Purgatory, and I need a Mass to free my soul from it. God has given me permission to come to you and ask for your prayers.' After I had listened to his story, I said, 'You can rest assured that I will celebrate Mass tomorrow for your liberation.' " Padre Pio reported: "I was agitated. I told the superior Father Paolino da Casacalenda what had happened and asked to celebrate the Mass for Pietro." Father Paolino gave the permission and later went to consult the registry at City Hall. In that date, a fire had killed a man with that name.

In 1918, Padre Paolino da Casacalenda was the Superior of the convent in San Giovanni Rotondo, when Padre Pio received the Wounds. From 1944 to 1950 he was Superior Provincial in Foggia. He had the idea of organizing a system of reservations for the confessions to Padre Pio that started on January 7,1950. He wrote his memories in a manuscript.

Padre Pio to Cleonice Morcaldi, a month after the death of her mother: "This morning your mom flew to Paradise. I saw her during Mass."

Padre Pio reported to Padre Anastasio di Roio: "One night I was alone in the choir and I saw a friar cleaning the altar late at night. I asked him to go to bed since it was so late. He said, 'I'm a friar like you. I did here my novitiate and when assigned to take care of the Altar, and I passed many times in front of the Tabernacle without making the proper reverence. For this sin I am in Purgatory, and the Lord sent me to you. You decide how much longer I have to suffer in those flames.' I told him, until the Mass in the morning. He said "Cruel" and disappeared. I still have a wound in my heart. I could have sent him immediately to Paradise, instead he had to stay one more night in the flames of Purgatory."

Padre Pio told Padre Onorato Marcucci who was helping him. "Last night I was not well and didn't make you sleep. I have been thinking how to compensate you, so I took a plenary indulgence for your mother to send her to Paradise."

Padre Pio: "I believe that not a great number of souls go to hell. God loves us so much. He formed us at his image. God loves us beyond understanding. And it is my belief that when we have passed from the consciousness of the world, when we appear to be dead, God, before He judges us, will give us a chance to see and understand what sin really is. And if we understand it properly, how could we fail to repent?"

Florence Fine Ehrman'd father contracted in 1965 a severe form of amyotrophic lateral sclerosis. He asked for Padre Pio's prayers. Her father died in January 1966. She went to Padre Pio in October 1967 asking if her father, a devout Jew, was saved. "Julius Fine is saved, but we need to pray a lot for him."

One night in 1944, the friars heard loud voices coming from downstairs saying "Viva Padre Pio". The superior Padre Raffaele da Sant'Elia a Pianisi told the doorkeeper Fra Gerardo da Deliceto to let those people out and lock the door properly. Fra Gerardo went downstairs, didn't find anybody, and the door was double locked as it was supposed to. He went back to report. Padre Raffaele was puzzled and went straight to Padre Pio asking if he knew something. "Oh! Those were soldiers who had died on the battleground, and came to thank me for their salvation."

In 1945, Fra Modestino asked Padre Pio a comparison between a fire on hearth and the flames of Purgatory. "They compare like fresh water and boiling water." Fra Modestino was from the same town of Padre Pio. His family was a neighbor and his mother grazed the sheep at Piana Romana, like Francesco. He was the doorkeeper of the convent and he did the inventory of the cell after Padre Pio's death. He enjoyed a special spiritual relationship with Padre Pio.

One day Padre Pio told his doctor: "I'm praying for the good death of my great great grandfather." "But he died more than one hundred years ago!" "Remember that for God there is no past and no future, and everything is present. So God made use at that time of the prayers I'm saying now."

In 1922, Bishop Alberto Costa asked Padre Pio if he had ever seen a soul in Purgatory. "I have seen so many of them that they don't scare me anymore."

A friar testified: "We were all in the dining room when Padre Pio got suddenly up and walked at steady pace to the door of the convent. He opened it and started having a conversation. The two friars that went with him didn't see anybody and started thinking that something might be wrong with Padre Pio. On the way back to the dining area Padre Pio explained. 'Don't worry. I was talking to some souls on their way from Purgatory to Paradise. They came to thank me that I remembered them today in the Mass.' "

Padre Pio said: "More souls of the dead from Purgatory than of the living climb this mountain to attend my Masses and seek my prayers."

One time someone asked Padre Pio how Purgatory could be avoided. He replied, "By accepting everything from God's hand. Offering everything up to Him with love and thanksgiving will enable us to pass from our deathbed to paradise."

Nina Campanile's brother Pasqualino died in combat on September 26, 1916. Her mom sent Nina with her teacher Vittorina Ventrella to ask Padre Pio if Pasqualino was saved. "Yes he is saved, but he needs your prayers." She asked again on Christmas 1918. "He is up there!"

Carmela Marocchino's brother Padre Vittore da Canosa died suddenly on January 29, 1958. Carmela asked Padre Pio why the sudden death. "Do you know what Jesus did of your brother? Jesus went into the garden, and there were many flowers, and one was more beautiful than the others. He leaned on the most beautiful and picked it. "Is he saved?" "Yes, but we need to pray." On July 29, she asked again if he was saved. "My daughter, we priests are more responsible in front of God. Let's continue praying." On December 29, 1958, she asked again were her brother was. "He is in Paradise."

Carmela Marocchino asked Padre Pio if her parents were safe. "Even if your parents are in Paradise we need to continue to pray. If they don't need prayers the suffrage are applied to other souls."

Padre Francesco Napolitano reported what he had heard from Orazio, Padre Pio's father. Orazio went to spend some few days with hi son in 1926. He was assigned cell #10. When he tried to enter the cell, two friars stood in front of the door, not letting him in. He explained who he was, to no avail. When he made a step to force himself in, they disappeared. He was terrorized, and went to Padre Pio. "Dad, don't get agitated, those are two poor friars in Purgatory. They have to serve their Purgatory in the spot were they disobeyed the rule of St. Francis."

Padre Francesco Napolitano reported that in 1945 Fra Pietro, entering his cell at night, saw a young friar sitting on his desk, with the head down like he was meditating. He asked who he was, but he disappeared. Terrorized, he run to Padre Pio. Padre Pio accompanied him back to his cell and said: "That young friar is a poor novice who is serving his purgatory in this cell. But don't worry he will not bother you again, and you will never see him again."

"The souls in Purgatory repay the prayers that we say for them."

"When we pray for the souls in Purgatory we will always get something back."

"The souls in Purgatory pray for us."

Padre Giuseppe Antonio da San Marco in Lamis was ill in the Foggia convent. On December 30, 1936, Padre Pio was asked to pray for him because his heath was deteriorating. That night somebody knocked at Padre Pio's door. Padre Giuseppe entered in the room. "How are you doing? They told me that you were gravely ill and now i see you here." "I'm well," Padre Giuseppe replied. "All my suffering has ended, and I came to thank you for your prayers." Then he disappeared. Padre Pio told to the other friars what had happened. Nobody knew yet that Padre Giuseppe had died. Later they found out that he had died at the same time that he had visited Padre Pio.

Maria Pompilio, when her brother died, asked Padre Pio to intercede so that he could come in her dreams. Her brother came in a dream and said: "Padre Pio assisted me in my agony. He stayed until the Judge judged me. I was given eleven years of Purgatory, but for intercession of Padre Pio the pain was reduced to one year. Many mysteries in the life of Padre Pio will be known only in the other world." The morning after Maria went to see Padre Pio. from afar he said: "Are you glad now?" "Yes, it seems that you are everywhere." "What sense has for me being on Earth if i can't go up and down. I know. Your brother told you that the mystery of my life will be known only in Paradise."

Images courtesy of caccioppoli.com and wikipedia.org
Posted by do battad at 4:30 PM